How to Convert Amazon Music to WAV

Amazon Music is a digital music streaming service built by Amazon company. Since 2007, the platform has quickly gained traction. The platform enables users to unlock millions of songs and thousands of curated playlists. To enjoy Amazon Music tracks, you can download the Amazon Music App on mobile phones or go to music.amazon.com and sign in with your Prime or Unlimited membership details. Except for computers and smartphones, Amazon Music is also available on all Amazon Echo devices and many other Alexa-enabled devices.

If only you become a paid member, you can use its offline listening feature. Then you can listen to your favorite Amazon songs offline at any time, when you are cooking, running, working, taking part in a dinner party, etc. However, while offline listening is possible, these temporary files can't be used to rip Amazon music files. This means that even if you subscribe to its service, you only have the right to enjoy downloaded Amazon songs temporarily. This article will introduce you to an Amazon Music to WAV converter to make you listen to songs more freely. This converter can help you remove DRM restrictions and get Amazon songs in WAV format with lossless sound quality.

Part 1: What is WAV Format?

Part 2: How to Download WAV Files from Amazon Music?

Part 1: What is WAV Format?

Created by Microsoft and IBM, WAV is a subset of Microsoft’s Resource Interchange File Format specification for storing digital audio files. It is an uncompressed audio format that requires no processing and will occupy quite a bit of space, coming in at around 10 MB per minute.

WAV can store raw audio that does not need special encoders or decoders to use. And this is why it is well compatible with different platforms and operating systems. However, WAV files are often saved and played on Windows computers rather than Macs. Besides, they’re also mainly used in the professional music recording industry to retain good audio quality.

A WAV file is a ubiquitous and commonly used audio format file. Therefore, many programs can open them, such as Windows Media Player, Winamp, iTunes, etc.

Users using Windows or macOS can directly open and play WAV files without downloading and installing any other third-party software. For example, on Windows 10 computers, WAV is played by default in Windows Media Player, and on a MacBook, they play by default in iTunes. But if you are using Linux, you must install a player that supports WAV format to open WAV files, such as VLC Media Player or Clementine.

Then double-click the WAV file to open the file and start playing.

First, Amazon Music exists in a specially protected format, and this format cannot be edited or transferred. But why did we choose to convert it to WAV format and not the other? It depends on whether this format suits your needs.

Suppose there is a need for a lot of editing song files. WAV is a top option for you. Because you can easily handle WAV files in any podcast editing software, most recording software can be compatible with WAV files. And if you pay more attention to the sound quality factor. WAV can also stand out. WAV files will not be compressed, and listeners will hear layering and ending changes in multitrack recordings that cannot be achieved with compressed MP3 files.

Part 2: How to Download WAV Files from Amazon Music?

As mentioned above, the songs you download from Amazon Music with your subscription account cannot be played on some unauthorized devices or apps, let alone converted to other standard audio formats. But don't worry. There are some simple but very effective tools to help you make the transition. TunePat Amazon Music Converter is the most stable and the best performing converter among various options.

This converter can convert Amazon Prime Music and Amazon Music Unlimited to different formats, including MP3, AAC, WAV, FLAC, ALAC, and AIFF, so you can listen to songs on the go or edit them according to your needs. What's more, the program also provides very flexible and user-friendly output settings. While you get the perfect song quality, the converted song ID3 tags will also be preserved. TunePat adopts the most advanced decoding technology, which can support the task to be completed ten times faster than ordinary converters. 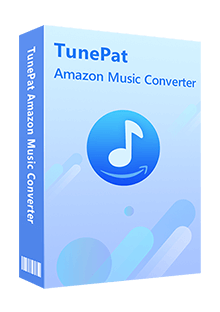 TunePat Amazon Music Converter is a handy and effective program. You need to set up WAV as the output format, add desired Amazon Music tracks to TunePat and finish the conversion process. The program is available on both Windows and macOS computers. Here we will take the Windows version as an example: 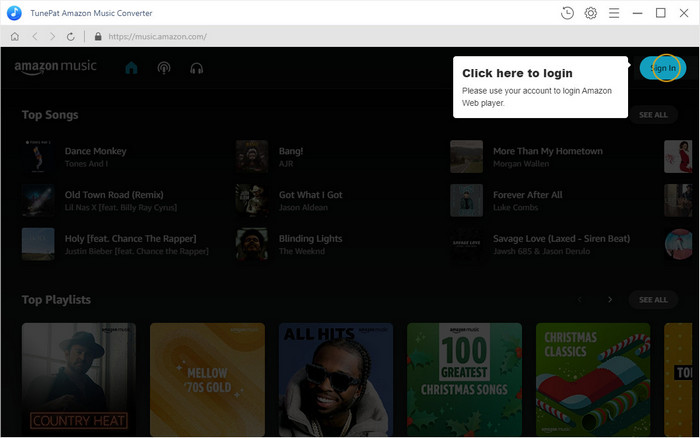 Go to the Settings window by clicking the gear icon on the upper right bar and finish the output settings there. Select WAV in the Output Format column. Also, you can customize the output quality, output path, output file name, etc. Depending on your preferences, you can sort the converted files by album, artist, album/artist, or artist/album. 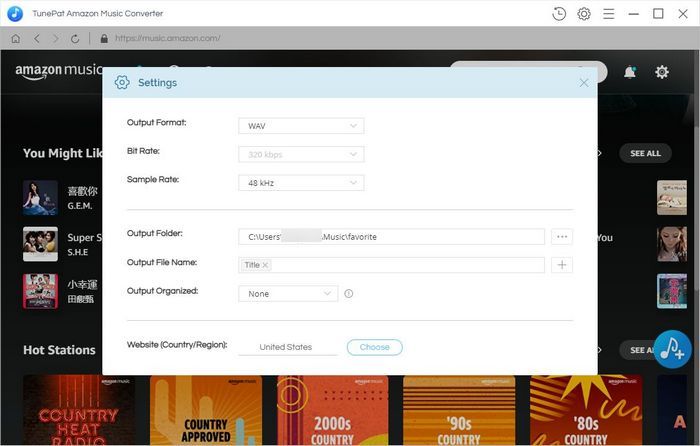 Now start selecting the songs you want to convert. When you open a target, you will find that the Add to list button on the right will become selectable (it changes from grey to blue). Click this button, and you will see a pop-up.

Depending on your needs, you can:

1. Select the songs you want in the pop-up window and click the Convert Now button to start converting these music files to WAV format immediately.
2. If you want to convert songs from different artists, albums, or playlists simultaneously, please select the Save to list button instead. These selected songs are temporarily saved to the task list in the background of TunePat. After all, selections are made. Click the task list button directly. Select Convert to start converting songs into WAV format. 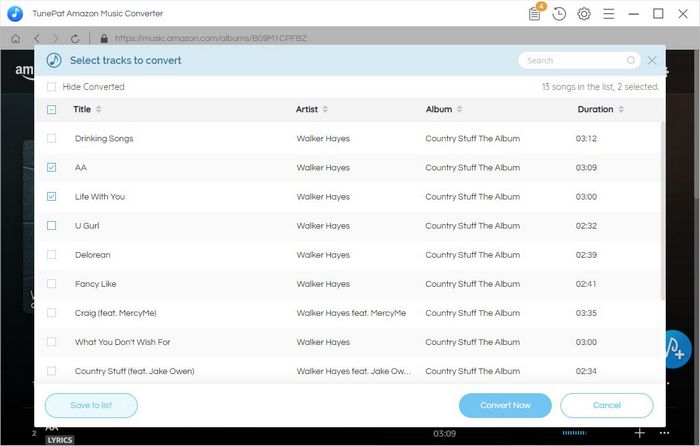 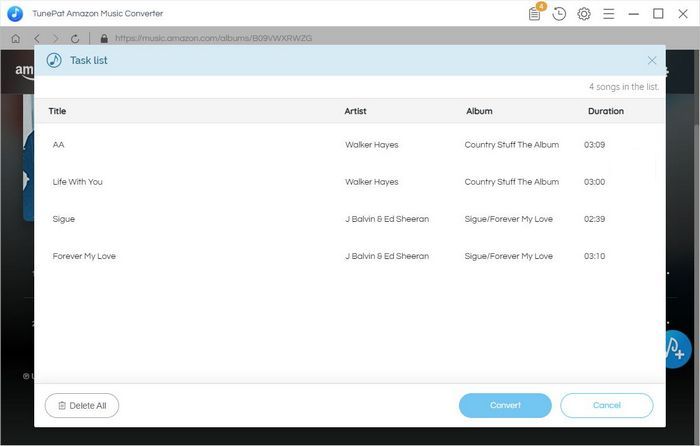 Now you have to wait for the conversion to complete. After completion, you can browse the converted songs in the History module. Or play it directly on the computer with the media player that supports WAV files, like the Windows Media Player. 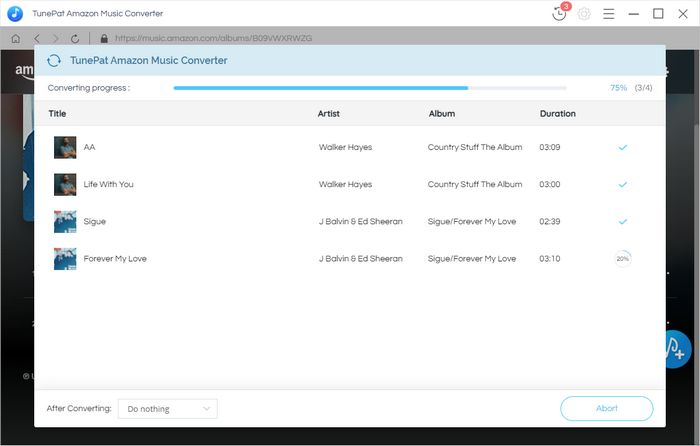 In short, if you want to get files from Amazon Music in WAV lossless format, TunePat Amazon Music Converter is your best choice. It proceeded with simple operation and fast conversion. The converted songs can not only be played in players such as Windows Media Player but also can be freely transferred to USB Drive, cars, game consoles, smart speakers, and other various situations to play. Come and download the free trial version!

How to Save Amazon Music to iPhone

How to Play Amazon Music on Apple TV